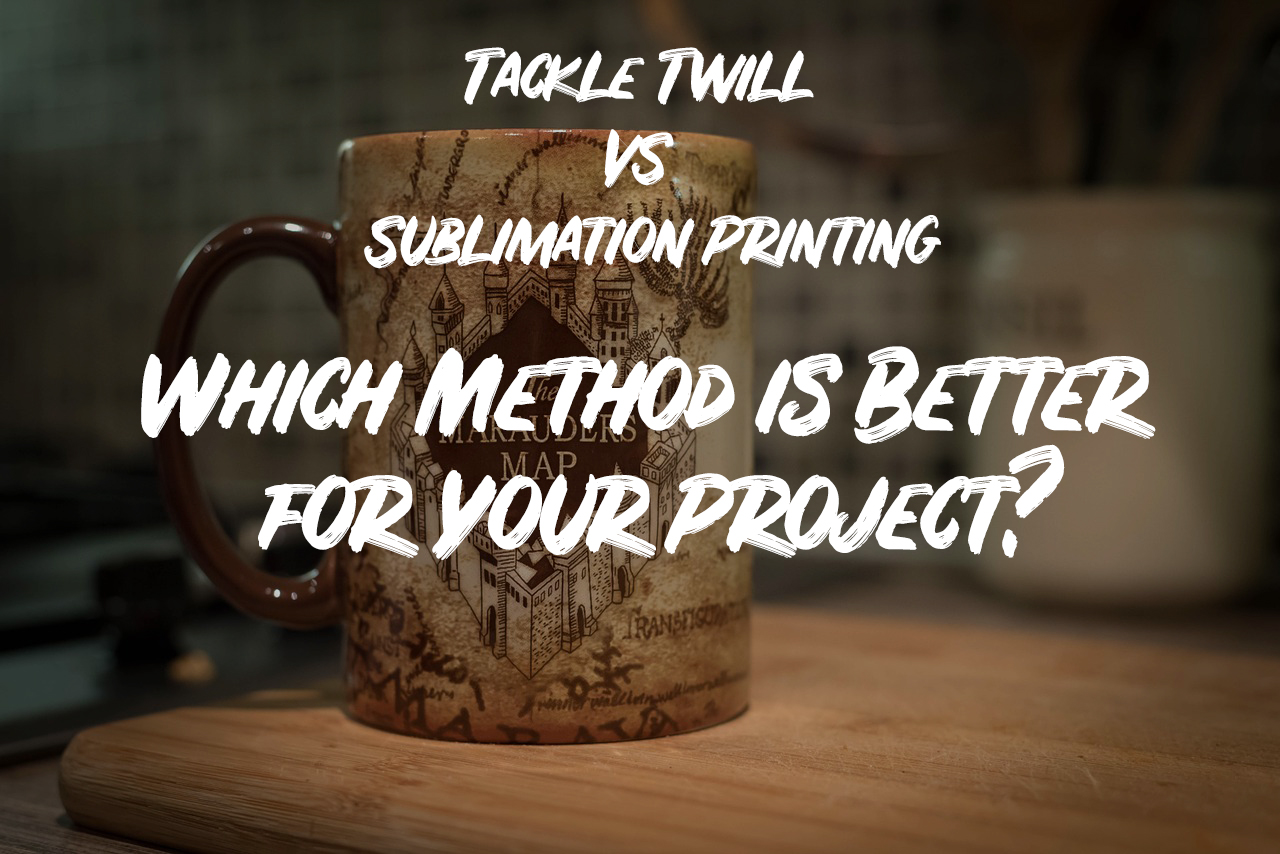 For as long as can be remembered, people have sought out ways of decorating their clothing and household items to add color and interest. Hand-painted scenes on silk scarves or a delicately embroidered floral motif on the bodice of a dress have always been popular. Since the mid century there has been a rise in the popularity of personalizing items with a name or favorite saying, even photos of one’s self or loved ones. As technology and design have progressed over the years, so have the methods by which this could be accomplished.

There are so many effective and successful ways of applying a design to another object. Some of the more popular methods include screen printing, woodblock, linocut, batik, heat transfers, tackle twill and sublimation printing. It is the last two that will be discussed here, as they are the most effective and long lasting of the lot. The first thing you will need to know is what these methods are and what they are used for, so let’s take a good look.

What You Should Know About Tackle Twill

Tackle twill is a clean and classic method of application that was developed by R. J. Liebe in 1923. Americans grew up seeing that method in their everyday lives without even realizing it. Sports jerseys, team jackets and baseball caps were all embellished using tackle twill. So, what is it? When tackle twill was first invented, it was the standard for high-quality, long-lasting appliqués; in fact, most very old pieces done in this way are still in good condition as far as the appliqué goes.

So, how is tackle twill done? The first step is to cut out the shapes you need, be they letters, swooshes or other designs. Typically the older work was done by cutting two layers of felt, one smaller than the other, creating some dimension and contrast. Let’s use a vintage red letterman jacket, for instance, to explain how this worked. Heavy white felt letters were cut out first, laid carefully in place and then stitched around the edges by hand to the jacket. When this step was completed, it was followed by cutting out the same design in a slightly smaller, narrower version in black felt. The black layer was placed on the white layer and centered, leaving a very narrow border of the white showing around the edges. Then the black layer was hand-stitched in place right through the white layer to the jacket. This created a multidimensional, crisp and attractive appliquéd design.

The same process was done with football jerseys, only the fabric used to form the letters and designs was called twill – a tough and finely woven polyester fabric with a diagonal weft that cuts well without fraying, resists shrinkage, is flexible and stands up to the stitching process. This is where the process got its name. Heat sealing the twill to the base layer (clothing article) can further stabilize the piece against shifting during stitching, as well as adding a bit of stiffness that makes the stitching process go more smoothly. Stitching is done by using the same color thread as the piece you are sewing the edge of and using an overcast stitch (where you stitch back and forth from the base layer to the twill layer in what is essentially a very close-together zigzag or satin stitch) attaching the twill with a very smooth and even row of stitching. This edge stitching can be done in the same color as the twill so as to be nearly unnoticed, or it can also be done in contrasting colors as an integral part of the design, adding interest and texture. Either way, it does add a slightly raised edge and gives a nice, finished feel.

Stacking the fabrics is not really limited to just a couple of layers, but layers can be added to create the desired design. For instance, you might start with a blue jersey, then do a first layer in white for contrast and outline. Next you could add the lettering in a black fabric, and then an orange basketball could be stitched on, overlapping the first two, and so on. In a reverse tackle-twill method, the center of the letter is sewn down first and then the outline is laid around it and both edges are stitched. While not as common as the stacking method, it produces an attractive and crisp-looking design as well. With either method, special treatments, called coatings, can be applied to the surface of the appliqué to add interest with a shiny, glittery or even a rubbery feel.

Over time, a variety of materials have been used with this method; vinyl, glitter fabrics, lamé, even faux fur – there is really no limit, other than making sure the material being applied is compatible with the base layer and can be laundered in the same way. Just as in the old days, you can find many items that have been decorated with the tackle-twill method. Hats, t-shirts, jeans, jackets, sport jerseys, company shirts, tote bags, shoes and even decorative items such as throw pillows or blankets are created using this process. It is durable and appealing for many uses.

What You Should Know About Sublimation Printing

Now let’s talk about sublimation printing. Sublimation has been around since the 1950s and has continued to be improved upon over the years. It is an advanced and scientific process that allows printed designs to become permanent. You have probably owned or at least seen an article of clothing that has a colorful design on the surface, while the back has been left white. This is in contrast to the more common yarn-dyed prints that, though the back may be more muted, are printed on both sides of the fabric.

Technicians are very careful to thoroughly smooth an area before applying the dye so as to produce a quality end product. There was a clever exception to this careful approach in the 2010s, when bohemian-style sublimation printed clothing was very popular (likely, it was a mistake some clever people capitalized on). Skirts, blouses or t-shirts were laid flat in preparation to be printed, but the wrinkles were not smoothed out prior to the process. This produced colorfully patterned clothing that had wrinkles at a variety of points that were left white and unprinted, as the fabric had been folded over during printing. No two were identical, and these articles became a part of a fashion statement rather than a costly manufacturing waste product.

So how does this process work? We will use a t-shirt for this example. In the first step, an artist creates a full-color design, which is then printed out with special liquid-gel ink on high-release transfer paper. The t-shirt (must be polyester or another synthetic blend) to receive decoration is placed very carefully on a thermal press. White newsprint or some such inexpensive paper is then placed below the t-shirt as well as inside it to prevent transference through to the back of the garment. The t-shirt is carefully straightened and smoothed, then the paper with the print to be applied is placed face down on the garment and carefully centered at the appropriate position. Another piece of newsprint is placed on top. The layers of paper below and on top are for the purpose of keeping the thermal press clean during the process.

This is where the magic happens. The press closes tightly, applying pressure on the t-shirt and the print. The press is also hot – between 350 and 420 degrees Fahrenheit, depending on the dye used. The heat and pressure cause the solid gel ink to turn quickly into a gas in what is called an endothermic reaction. The press is left closed for about 50 seconds. The gel ink, now converted to a gas form, bonds to the surface of the fabric at the molecular level, giving the fabric a more vibrant and permanent image than traditional heat transfers or screen printing, for instance, which may crack or peel over time.

This process can be applied to virtually any semi-porous or hard surface that will bond to the inks such as the synthetic fabrics mentioned above, magnets, plastic, plexiglass, and even ceramic mugs or tiles. The latter require a specially shaped heat press and yield fabulous results. Colors tend to intensify in this process, so if muted tones are desired, they should be slightly more muted in the design. Designs are permanent – clothing can be washed and dried over and over, and ceramics are dishwasher-friendly. So, as you can see, these two methods of decorating various items are both effective, and it is difficult to say which of these two processes – sublimation printing or tackle twill – is better. They both yield amazing and creative results. They are both long lasting and as attractive as a designer’s imagination can make them. The difference comes in the resulting look and feel that you want your item to have: a more hand-wrought and vintage look from the tackle twill, or a modern, vibrant look with more realism from the sublimation printing. Each method holds its own unique advantages.