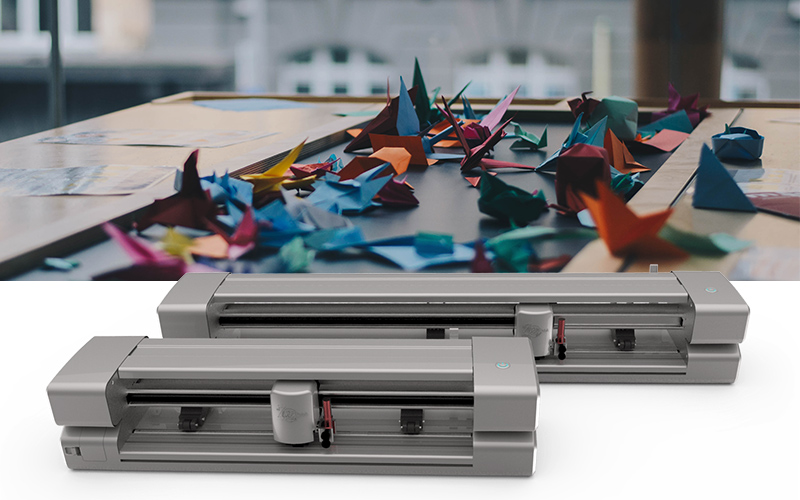 The KNK Zing brand has been a consistently popular name in automated cutters. Ask anyone for one of the most recent cutters they purchased, and the odds are that they have worked with a cutter under the KNK name. With a reputation like the Zing line, it’s not difficult to understand why they have stayed as reputable as they have.

One of the more recent offerings is the Zing Orbit, a huge upgrade in the continuing line of KNK cutters. After a thorough review, it’s safe to say you’ll be very pleased with everything that the Orbit is capable of doing. 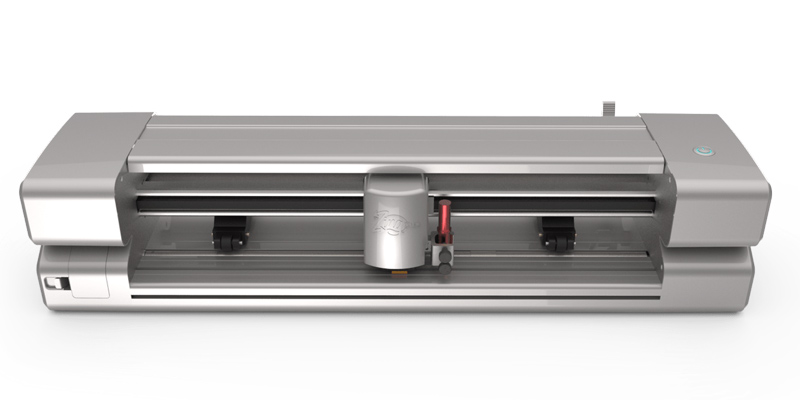 Klic-N-Kut wanted to make absolutely sure that their new cutter model represented feedback from consumers. While previous models have been highly regarded by enthusiasts, KNK took all positive and negative feedback into consideration when putting together the Zing Orbit.

Anything hooked up to a PC or Mac needs Bluetooth functionality, and that’s one of the first things you’ll notice about the Orbit. There’s still an option to use a USB cable in case you have a bad network. Otherwise, you’ll love the fact that you won’t have to use an extra wire to connect your cutter. With all the loose materials you may have lying around, this is a nice perk.

The Orbit also includes more speed settings, providing you with more customization options when you are ready to finalize your project. Thanks to the upgrades included by KNK, you can now bring your crafting dreams to life. You might be familiar with the Sure Cuts A Lot software, which is sold separately from the Zing Orbit vinyl cutter.

Sure Cuts A Lot is a marked improvement over Make the Cut, the software that had been included on the previous KNK Zing model. The two software applications are very similar, but you’ll find Sure Cuts A Lot to be much more user-friendly and modern than Make the Cut.

Alignment tools and the option to create your own patterns are just a couple of the new features that make the cutting process easier for you.

Thanks to the updates in the Zing Orbit, you won’t be restricted to stationary designs contained inside the pinch feed assembly. By using one lever to lift or lower the three wheels on the cutter all at once, you can adjust each pinch wheel to your desired location.

It feels a lot more professional than the original Zing, and there is a removable flatbed that provides you with a makeshift workbench. Being able to set down anything you’re currently working on is a great benefit while using the Zing Orbit. If you like a bit of bling with your die-cut machine, the flatbed can show off multiple LED colors.

While using the Zing Orbit, you’ll notice that it cuts designs from included hard copies. You can supplement this feature with your own designs, too. While using the laser inside the Orbit, you can craft your own patterns that aren’t attached to the predesigned patterns inside the model. Piercing, engraving, and embossing are all easy tasks for this machine.

Once the machine recognizes that you have designed a pattern, it can scan for registration marks, understanding where it needs to make cuts. Tight curves and very sharp angles are no problem for the Zing Orbit, making this a perfect option if you are an enthusiast for older magazines or classic documents.

Where Can the KNK Zing Be Used?

For all the features included with the Zing Orbit, it’s relatively portable and easy to carry. If you need to move it to another room once in a while, you’re probably not going to have any issues. If you’re planning on attending any meetups or conventions, however, you might want to consider how much you are carrying.

At 21 pounds, the Zing Orbit isn’t going to kill your back or pop your shoulder out of place when carrying it. It will, however, add on to all the other existing material you may be carrying with you. The biggest problem you might have is a lack of any handle for easy carrying. If you attend lots of events, you’ll need to load this machine into a box and hope it doesn’t jostle around too much.

Thankfully, the bulky Zing Orbit actually has its advantages for being so stocky. Even though you might have some difficulty transporting it, the maximum cutting width of 15 inches will pay off with your bigger projects. For oversized work, you can also find a 24-inch model on the market but be prepared to pay twice as much.

You have two options for connecting the Zing Orbit to your device. If you don’t mind the extra cord, you can hook it up via USB cable. For a reduction in clutter, you can also connect the Orbit to an existing Wi-Fi network. If this is your first die-cutter in a while, it might take you a bit to get used to not using the old cartridges anymore.

What Kind of Materials Can Be Used with the KNK Zing?

The KNK Zing Orbit’s cutting power is at the top of the die-cutter class. It’s clearly well-manufactured and doesn’t feel cheap, which is excellent when you consider the price you will pay for a new one. If you work with cork or balsa wood, the Zing Orbit is your new best friend. You’ll have no trouble bringing your vision to life with this model.

Name a material and the Zing Orbit can work with it. Textiles? Carpeting? Brownie batter? The Zing Orbit will slice through all of it and ask what else you can dish out. For any custom jobs involving logos or emblems, you can expect satisfied customers when you use the Zing Orbit for your business.

What Accessories Work with the KNK Zing?

KNK themselves have boasted about the number of attachments and accessories that are made for the Zing Orbit. One of the newest features shares the name of the Orbit itself. Known as the Orbitzer, this can be swapped with the default engraving and embossing tool already included with the machine.

Unlike the default attachment, the Orbitzer allows you to directly mark round objects. Gone are the frustrations of working with cylinders and spheres without getting the results you need. Thanks to the Orbitzer, marking round objects will feel like second nature.

You still have plenty of options for accessorizing with the Zing Orbit. The previously mentioned flatbed tables are available, as are blade holders in blue, yellow, and red colors. You can also purchase stands for both the 15-inch and 24-inch models.

How Does the KNK Zing Orbit Perform?

The biggest advantage that the Zing Orbit has over not just its competition, but its predecessors is in its performance. It might sound reductive, but the fact is that the KNK Zing Orbit is user-friendly and works well.

The biggest thing you will notice is the quality of the cuts that this machine can make. No matter what kind of material you are working with, you’ll have no issues, thanks to the incredibly high resolution at which the Zing Orbit can work. The 1,000 grams of cutting force cannot be overlooked, either – bodybuilders wish they could put that much pressure into a cutting project.

Have you ever been near completion on a project, only to find out that you have lost your work, or torn it completely and have to start over? The communication works two ways in the Zing Orbit, so you’ll never have to worry about losing your place during your project.

Depending on your skill level, you might plateau with the Zing Orbit. If you’re a highly-skilled amateur but not quite at the level of a commercial cutter, you won’t find a better machine than the Zing Orbit. The machine helps you out, but it doesn’t hold your hand with as many pre-installed designs like other models you can find.

What Are the Negative Aspects of the KNK Zing Orbit?

As much as the Zing Orbit will fulfill every want you could think of when using a die-cutter, that same feature can cause you some headaches. There is so much going on with this machine that you might end up skipping over some of its more advanced features completely.

While this might not be seen as a negative, it’s also part of the price tag. You’re investing in a semi-professional machine, and with it, gaining access to customization options you may have never seen before. If it feels overwhelming, you’re not alone. It could take you weeks, even months, to fully digest everything available to you with the Zing Orbit.

You’ll need to exercise patience and not rush when exploring everything available to you with the Zing Orbit. Read the included manual, get in touch with people who have used the Zing Orbit before, and never stop digging into the machine for new ideas. You’ll master it, but it won’t happen overnight.

What Else Is There to Know about the KNK Zing Orbit?

If you like the idea of working in a quiet environment, you’re in luck with the Zing Orbit. You won’t find a much quieter machine than this one, and it might seem strange at first. After a while, you’ll forget you are even working with a die-cutter once you begin to regularly create projects with this machine.

While there are plenty of software options for cutting, none of them are directly included with the Orbit. You’ll need to make your choice for a program after you have unboxed the die-cutter. There are plenty of free options out there, as well as the previously-mentioned pro version of Sure Cuts a Lot. You can also consider SCA Laster and eCAL 2.

Where Can I Purchase the KNK Zing Orbit?

KNK’s official website is one of the better choices for purchasing the Orbit models. You can also check Amazon, but their stocks are usually limited, unless you are comfortable purchasing through a third-party vendor.

A quick search on eBay yields some preowned models, but your best bet for finding a new model is the official website.

Ask yourself how long you have been working with die-cutters, and what aspects of the machines you have admired the most. If you have become something of a pro over the years, and you take suggestions without needing your hand held through the process, the KNK Zing Orbit is the perfect machine for you.

With so many customization options inside the machine, as well as the opportunity to use two-way communication that has been improved over the years, this is a no-brainer. If you are serious about your crafting, you’ll feel that your money was well-invested when purchasing the Zing Orbit. It is by no means the cheapest die-cutter on the market, but you probably don’t want the bargain model if you’re reading this.

Don’t feel intimidated by the number of features available in the Zing Orbit. Just like crafting, learning this machine is an art form, and you’ll need time to understand everything contained inside. Think of the machine as an extension of your own creativity. You’ll learn just as much with the Zing Orbit as you have in your actual crafting career.

As long as you can look past the time needed to learn all the finer features of the KNK Zing Orbit, you won’t have anything to complain about. It’s professional, quiet, well-constructed, and portable enough for you to bring to the occasional social event or convention. Don’t forget about the wireless connectivity, making this one less thing to trip over while working on your next project.

When you finish crafting your next project, you’ll feel great about taking the plunge on either model of the Zing Orbit.